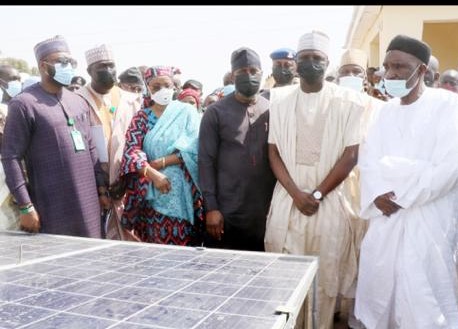 The governor who expressed appreciation during the commissioning of 30KWp solar hybrid mini grid project at Mbela-Lagaje community in Mayo Belwa Local government Tuesday, noted that the project will improve the socioeconomic livelihood of the inhabitants tremendously.

The governor lauded president Buhari, Federal Ministry of Power and Rural Electrification Agency (REA), for citing the project in Adamawa State, adding that the gesture will prod the people to explore a number of entrepreneurial possibilities.

“For me, this is what true equity feels like; when the government at the center ensures that development impact is evident in the nooks and crannies of Nigeria.

“I will encourage the people of Mayo Belwa to optimize the use of this new infrastructure as well as collectively leverage on possible investment opportunities.

“Electricity enlivens the socioeconomic activities in communities such as these. Therefore, the importance of providing adequate and reliable electricity in Nigerian communities cannot be overemphasized.

“It is important to point out that, the industrious people of these communities are expected to witness growth in business and productivity with this clean, safe and reliable electricity while ensuring good education for school children and security in the community at night,” Fintiri said.

In his remarks, the Managing Director and Chief Executive Officer of REA, Ahmad Salihijo Ahmed said the federal government is poised to ensure the deployment of equitable electricity to rural dwellers across every nook and cranny of Nigeria.

“Powering this community is another testament of the impact of REA’s off-grid solutions. I’m delighted that with this intervention, Mbela-Lagaje will witness upgrade in its socioeconomic status.

“I also strongly believe just as we have seen in other communities where these interventions have been deployed, that the quality of lives will be improved and both the young and the old will have the opportunity to explore the possibilities derived from clean, safe and reliable electricity.

“True national development happens when there is equitable deployment of such sustainable interventions. Leveraging on the leadership and support of the federal ministry of power, we will ensure that unserved and undeserved communities across Nigeria continue to feel the impact of the federal government’s energy interventions,” he said.

Also commending the federal government, chairman senate committee on power, Gabriel Suswam noted that at the 9th Assembly, electricity access has formed a major part of the conversation.

Suswam who was represented by the senator representing Adamawa central, Aishatu Ahmed Binani said; “with a deep understanding of the pivotal role of electricity access to national development, we have continuously steered developmental actions around the deployment of electricity infrastructure across the nation.

” I’m glad that with the support of his Excellency President Buhari’s government, the impactful work of my honourable colleagues and fellow members of the committee as well as implementing role of REA, previously unserved communities are being powered one at a time.

“Projects such as the one we are here to commission today further drives home the relevance of renewable energy and why we must continue to leverage the abundant natural resources and expertise in this great nation.”

They urged the people to appreciate the gesture by being law abiding and to make efficient use of the power project to enhance their standard of living.