For decades, the people of three rural communities in Kogi, Kebbi and Akwa Ibom states lived without electricity. But this year, the Rural Electrification Agency (REA) of the federal government ended that era with solar power projects. MUYIWA OYINLOLA reports the mood in the communities 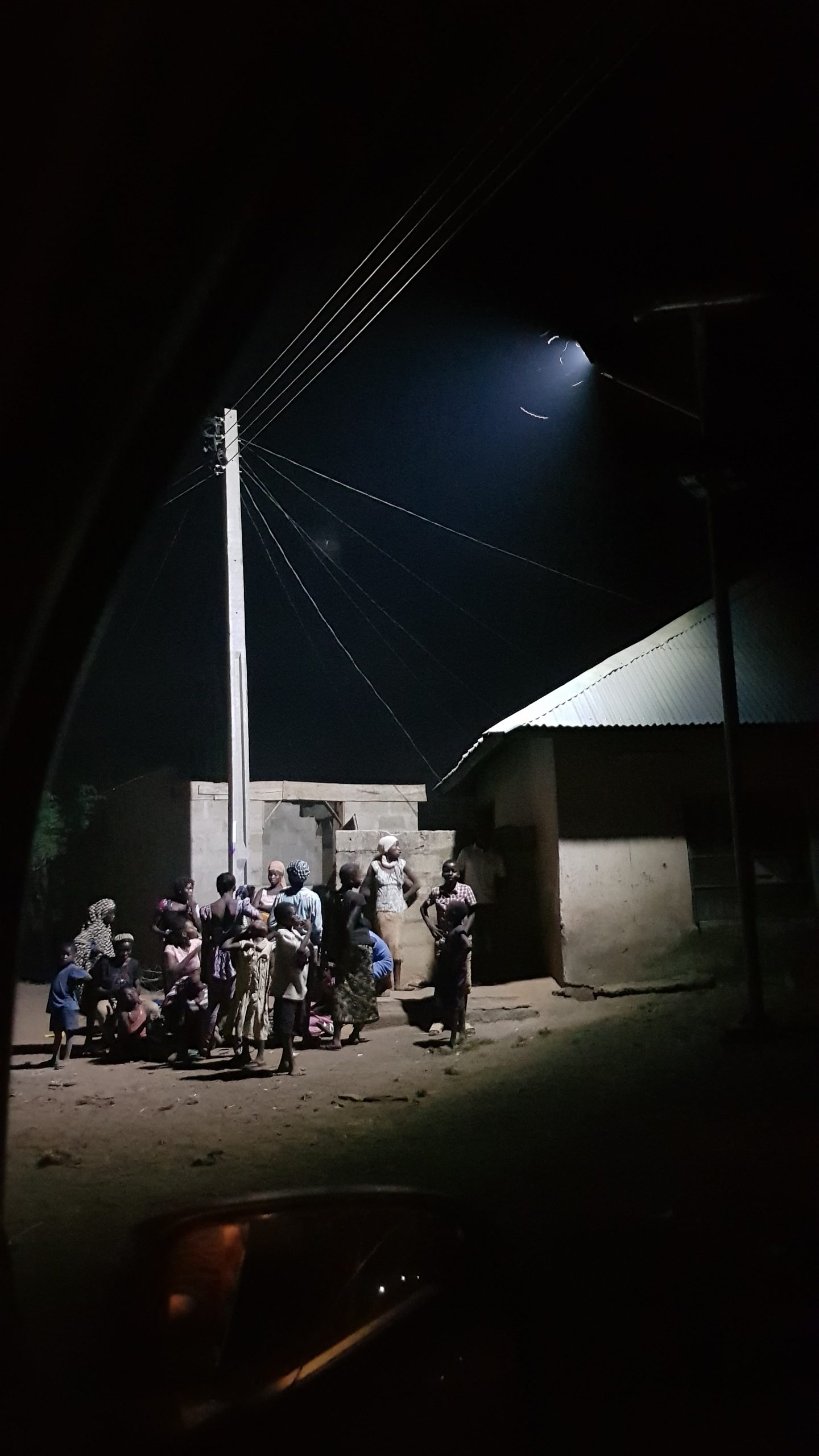 Indigens of Akpabom enjoying nigthview under a solar street light for the first time in their lives: Photo source; REA

Between Monday, August 19, 2019 and October 31, 2019, the government opened the communities to modern civilisation as the residents watched with excitement when electric power was switched on in the communities for the first time ever.

The first to benefit from the scheme were the people of Upake area of Kogi State when REA, a federal government entity, commissioned an 80 kilowatts solar hybrid mini grid power plant in the town, which brought untold joy to the people. Upake, one of the largest ethnic groups in Kogi, is the ancestral home of the Ebira, and has been in existence for three centuries. On that fateful day, they trooped out in large numbers to witness the historic event. Some of the shell-shocked residents expressed gratitude to the federal government for providing the area with electricity for the first time ever.

They said that they were enjoying the dividends of democracy through the rural electrification project. One of the residents, Haruna Bashiru, said that the provision of electricity in Upake had closed a sad chapter in the chronicles of the community. He said: “I was a toddler when we started pushing for electricity over 25 years ago, and in 2019, the Muhammadu Buhari administration gave us our right. We now use electricity free. This is a fishing community. With this electricity, our women can preserve their fish.”

Another resident, Monday Muslimat, praised the REA for the feat as well as commended the people of the town for their patience and perseverance. Among the dignitaries that graced the occasion were the managing director of REA, Mrs. Damilola Ogunbiyi; the lawmaker representing Ajaokuta Federal Constituency in the House of Representatives, Hon. Idris Lawal; chairman, House of Representatives Committee on Power, Aliyu Magaji; secretary to the state government (SSG), Dr. Folashade Ayoade, (who represented the governor); the senator representing Kogi Central, Senator Yakubu Oseni; the executive director, Rural Electrification Fund, Dr. Sanusi Ohiare; the administrator of Ajaokuta local government area, Prince Akaba; the Ananyiwa of Upake, Ibrahim Okenyi Eneye, CEO,  New Moon, Nigeria Limited, Oluseyi Omotosho, and others

Governor Yahaya Bello expressed delight that the federal government was committed to providing reliable power supply to even remote communities across the country, adding that he was particularly thrilled that a community in his state was one of the first beneficiaries. Also, Ogunbiyi said that the Muhammadu Buhari administration was totally committed to ensuring that electricity was made available to Nigerians. With the unveiling of the solar hybrid power plant, she noted, more families and businesses in Upake would have access to clean, sustainable and reliable electricity from the sun.

“Without doubt, the solar hybrid power project being commissioned today would en hance productivity and provide jobs in Upake. It would benefit the 2, 976 members of Upake community, as families and businesses in Upake will have access to clean, sustainable and reliable electricity from the sun,” she said. While thanking the state government and the people of Upake community, Ogunbiyi praised New Moon Nigeria Limited, the firm that partnered with her agency on the project

The Ohinoyi of Ebira Land, Alhaji Ado Ibrahim, who was represented at the event, described electric power as a vehicle of necessity that drives the economy. “For any community to progress, basic amenities need to be accessible. Electricity is a necessity that has a ripple effect on other human needs. With this solar plant facility, there will be a significant improvement in the quality of life for Upake indigenes and even the environment.” The Ananyiwa of Upake, Ibrahim Okenyi Eneye, expressed gratitude to REA. “I stand here representing the people of our dear community. Just as you assured us of the plans to complete this project from the first day you visited us, I want to assure you that we will work with the developer to make sure that no harm will come to this project. It is our mini grid and we will protect it as our property,” he said.

Ohiare (executive director of the Rural Electrification Fund) praised the federal government and the management of the REA for ensuring the completion of the power project. In Kebbi State, the excited people lined up the streets, sang and danced to mark the federal government’s commissioning of a 98.8KW solar hybrid mini grid power plant in Kare-Dadin Kowa in Arewa local government area. The community leaders said that Tuesday, September 17, 2019 would remain an indelible date for them because it was the day electricity came to the area

Kare-Dadin Kowa is a community that boasts of vast agricultural capacities. The border town prides itself as being among communities that produce the best rice and millet in Nigeria. The residents said that they were happy that with the newly commissioned facility, their lives would be better. The plant is among those being built across the country by REA under its Rural Electrification Fund (REF). REA said that the solar plant would provide clean energy to 483 residential buildings, schools, places of worships, health centres, as well as 82 commercial buildings

In the first phase, REF is expected to electrify 12 communities and deploy 19,000 Solar Home Systems (SHS). REF projects are administered using a Public Private Partnership (PPP) model. The district head of the community, Alhaji Musa Maina Jantullu, said that the project, which has brought his village out of total darkness, would change its entire landscape for the better. The minister of Power, Saleh Mamman, praised President Buhari for giving the required support to the REA and congratulated all the parties involved in the completion of the project. He said: “Under my leadership, the Ministry of Power will continue to provide requisite policy interventions to ensure that transformative projects such as this will have the desired impact of electrifying Nigeria.” At the event, the Kebbi State governor, Abubakar Atiku, who was represented by the permanent secretary, Ministry of Water Resources and Rural Development, Aminu Umar, commended the federal government for its rural electrification initiative. Dr Ohiare, who represented Ogunbiyi at the commissioning, applauded the commitment of the federal government to making electricity available to rural communities across Nigeria. He said that “Kare-Dadin Kowa is the second of 12 communities earmarked to benefit from REF grants

The project being commissioned is implemented by REA with the goal of providing equitable access to electricity across Nigeria. Today, REA provides electricity to 82 commercial businesses, 482 residences and over 3,180 residents, including women and children. I must state that these are exciting times because history is being made in Kare-Dadin Kowa, Kebbi State and in Nigeria as a whole.” Emir of Argungu, Alhaji Samaila Muhammed Mera, who was represented by Alhaji Ibrahim Hassan said the community and its neighbours would benefit immensely from the project. Bulus Maiyaki, a director in REF, commended President Buhari, the National Assembly, the Ministry of Power and other stakeholders for ensuring the successful implementation of REF projects across Nigeria. In Akwa Ibom State, the President Buhariled administration under its Next Level agenda achieved another milestone on Thursday, October 31, 2019 when it commissioned a 1,00KW Solar Hybrid Mini Grid Power Plant in Akpabom community in Onna local government area. Akpabom has a population of over 2,000 people, whose major economic activities are fishing and farming. The project, which was executed by REA, was the third to be commis sioned under REF. Dr Ohiare, who delivered an address at the event on behalf of Ogunbiyi, said that “as an agency, we are responsible for powering unserved and underserved communities, therefore, it is fulfilling every time homes, businesses, schools and medical centres are connected to sustainable solar power

“Almost immediately, we are able to witness rural communities being transformed with clean energy through the jobs that are created during construction, to their micro and small businesses scaling to larger capacity thanks to reliable electricity,” she said. Ogunbiyi urged the community to use the power plant to grow their economies, start new businesses since they now have the reliable electricity to run their shops, cold rooms, schools and others. The representative of the clan head of Oning Clan, Eteidung Udo Akpan, expressed his community’s appreciation to the federal government for providing the people with the basic social amenity. “I consider it a blessing that this project, which will change the lives of the people in our community, is being implemented during my tenure as clan head,” he said.

Invitation for the Pre-qualification of Contractors for Rural Electrification Projects under the 2020 Appropriation Act
25.05.2020 0 0