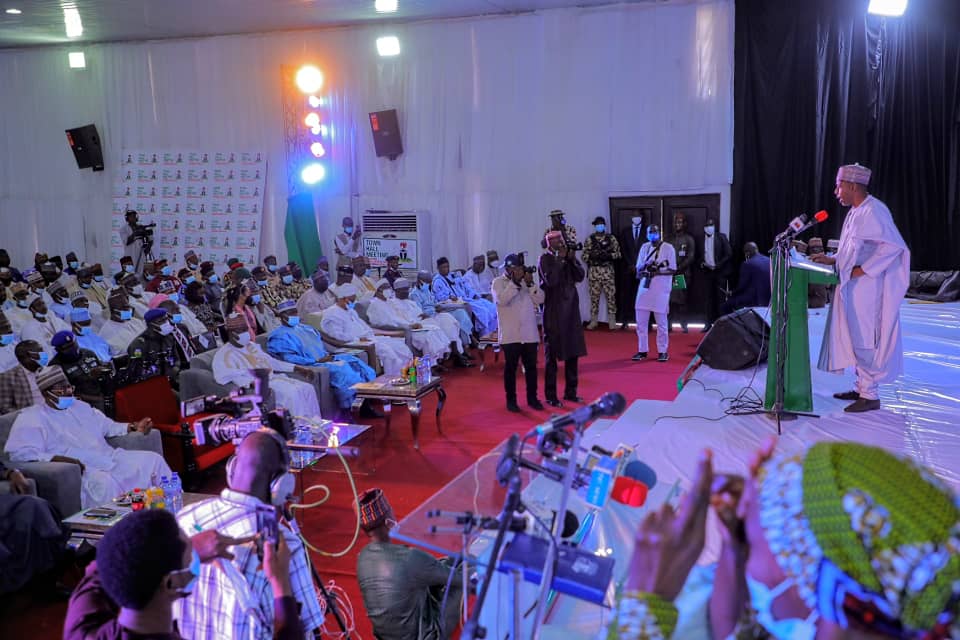 REA PARTICIPATES IN THE FEDEREAL MINISTRY OF INFORMATION AND CULTURE TOWN HALL MEETING TO ADDRESS VANDALISATION OF CRITICAL NATIONAL POWER AND TELECOMMUNICATIONS INFRASTRUCTURE IN BORNO IN PARTICULAR, AND IN OTHER STATES OF THE FEDERATION

Maiduguri, Borno State, Nigeria – The Rural Electrification Agency (REA) participated in the third edition of the Town Hall Meeting organized by the Federal Ministry of Information and Culture to address vandalisation of critical national power and telecommunications infrastructure in Borno in particular, and in other states of the federation. The event took place at the Multipurpose Hall, Government House, Borno State.

The one-day event witnessed the presence of the Host, His Excellency, Executive Governor of Borno State Professor Babagana Umara Zulum, Honourable Minister of Information and Culture Alhaji Lai Mohammed and representatives of the Honourable Minister of Power Engr. Abubakar Aliyu (represented by the Managing Director of Transmission Company of Nigeria – Engr. Sule Ahmed Abdulaziz) while the Honourable Minister of Communications and Digital Economy Professor Isa Ali Ibrahim Pantami was represented by Mr. Salman Abdulaziz a Commissioner at NCC). The REA was represented by Mr. Ahmed Yahaya Alhassan (Deputy Director ICT) and Engr. Mohammed Musa Zonal Coordinator North East Zone. His Royal Highness Shehu of Borno and other Chiefs as well as Elders of Borno State and serving Senators were in attendance. Defense and Security outfits, Chief Executives of parastatals under Ministry of Information and Culture, dignitaries and other key stakeholders witnessed the occasion.

The idea of the Town Hall Meeting is conceived as part of the efforts by the Federal Ministry of Information and Culture to bridge the communication gap between Government and the citizenry and also to keep them better informed of the policies and programmes of the FG. Honourable Minister for Information and Culture Alhaji Lai Mohammed provided an overview of the vandalisation of power and telecommunications infrastructure in Borno State. He lamented the level of destruction of infrastructure caused by Boko Haram terrorists in Borno State and other parts of Nigeria describing the destruction as worse than he had imagined. He said that We could not have chosen a better venue than Maiduguri, which has been cut off from public power supply since January 2021 due to the destruction of power infrastructure by terrorists. Also iterating that, terrorists who are destroying power and telecommunication facilities in Borno have chosen to weaponize these attacks in order to inflict the maximum hardship on the people and also slow down the advances of our gallant troops in decimating them.

On his part, the host, Executive Governor of Borno State stated that Borno State is the epicentre of Boko Haram insurgency and even though the insurgents are surrendering, some elements among them are unrelenting in their quest towards achieving their aims with tens of thousands of public and private properties destroyed over the last 12 years. Vandalism, which is one of their trademarks has taken heavy tolls on National, State, Local and Private assets with particular reference to Power and Telecommunication infrastructure. He highlighted some of the intentions of the vandals which include; use of solar panels and batteries to provide light and comfort for themselves; use poles to construct tents that serves as their shelter and mount road blocks, etc. He mentioned that the 132KV power lines from Biu to Maiduguri as well as 330KV line from Damaturu to Maiduguri were vandalised. Power line towers numbering about eight (8) and recently another two (2) more were destroyed sending Borno State into darkness. He requested that instead of long speeches, solutions should be proffered during the town hall meeting.

The Honourable Minister for Communications and Digital Economy through his representative spoke about the destruction of Communication towers that has affected services in Borno State.

The representative of the Military High Command in Borno State reiterated the need to expose and arrest all those who engage in buying pilfered infrastructure items along with those who bring to them to sell and subject them to the full wrath of the law. He said the power and communications equipment can be carbon coded with a special material they have to prevent and detect theft.

Other comments, suggestions, requests were made by elders of Borno through the Borno State Elders Forum.

On our part, the REA’s history, experience and use of the electricity sustainability platform Rural Electricity Users Cooperative Society (REUCS) which are all geared towards providing sustainable electricity to unserved and underserved areas across the country as mandated by the Federal Government, as well as organise communities to own, maintain, protect and sustain their networks was submitted in writing and accepted with great interest. This creates in the public mind that government property is indeed citizen’s property and as such must be protected for the benefit of all. The multiplier effect of REUCS formations in the country sensitizes the larger citizenry to support the widespread campaign on the protection and ownership of public infrastructure/assets especially in the power sector.